One of the most ancient nations has a rich history, flavored with legends about the courage and power of the ancestors of Armenians. We have put together the most interesting legends of the origin of the Armenian people, which are part of the culture of the Armenians.

There are several versions of the origin of the Armenian people, as a separate unit, and there are still disputes over those legends. However, it is clear that the ancestors lived on the territory of Armenia long before the civilization emerged in most modern countries. 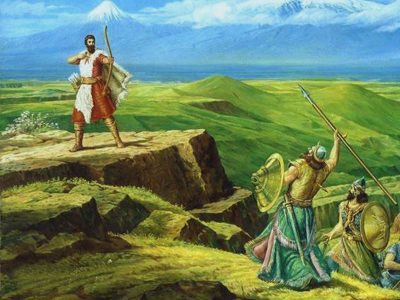 The theory of origin according to Armenians

One of the first legends that came to us thanks to the Armenian chronicler Movses Khorenatsi, tells about the god-like ancestor of Armenians Hayk. Hayt was a titan, the son of the gods. This version of origin represents pagan Armenia.

According to the legend Hayk fights against tyrant Bell and defeats him with one arrow. By the way, this was the first war in the history of mankind, which was documented. It is Hayk who becomes the ancestor of Armenians, in his honor the country is called Hayk or Hayastan, and the people – hay. There is even an exact date for the beginning of the Armenian people, the 1st of August, 2492 BC. On behalf of Aram, the descendant of Hayk, the name Armenia and Armenians originate.

Another Armenian legend refers to Christian times. According to legend, the ancestor of the Armenian people was one of the sons of Noah, who descended on the ark to Mount Ararat. It was the historical Armenian land that became the cradle of humanity. According to this legend, our “titan”Hayk was the descendant of Japheth, the son of Torgom (the ancestor of Armenians). By the way, the Arabic legend is also associated with the great flood and ancestors of the sons of Noah. 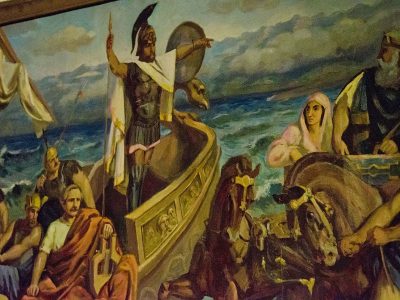 The theory of origin according to Greeks

This legend was told by the military commanders of Alexander the Great, but this version is not considered reliable, since the origin of Armenians from the Greek ancestor had a clear political orientation. A similar legend was told about the Persians, whose origin is also connected with Greece. The theory of origin according to Jews

The legend, found in the works of the Jewish historian Josephus Flavius “Judean antiquities” tells about the Armenians, as relatives of the Jews. According to legend, Armenians are descendants of Uros, son of Aram. The legend says that Uros is Ara the Beautiful (Ara Geghetsik), the son of Aram. According to another version, the name of Uros is associated with the ancient Van Kingdom of Ursa (Rusa).

All these legends are quite interesting, and definitely play a huge role in history. It is noteworthy that Armenians consider Jews, Greeks and Georgians as their relatives. This statement has quite a logical explanation; Armenians are the most important part of the Indo-European nations, and the Armenian language is one of the oldest Indo-European languages. This relationship can be clearly traced by comparing other languages from this group. You will find a huge number of words that have a clear similarity (for example, the door  – tür – dur in Armenian). It has already been proved that Armenians were part of the Indo-European people in the 4 th millennium BC and only in 3 thousand BC separated and became a separate unit. From this moment, the stories about the great nation and the history of the Armenian people in the territory of the Armenian highlands begin to be mentioned.